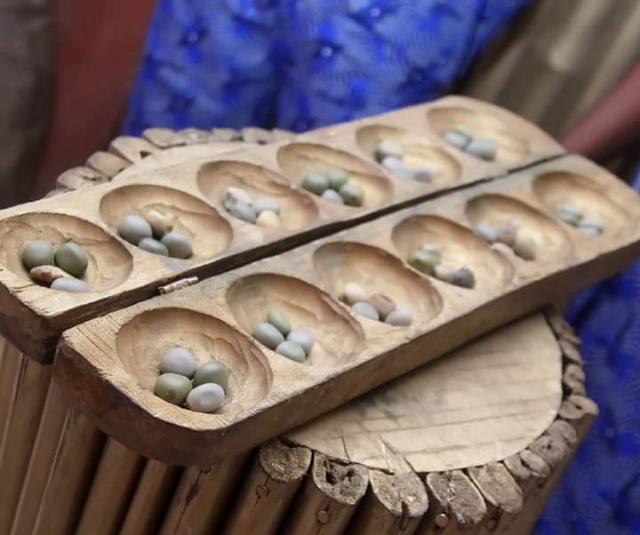 Ayo Olopon is a popular traditional game played among people of all classes for leisure, especially in the south western part of Nigeria.

In this piece, Isaac Afolabi finds out the uniqueness of the game, the skills and mode of playing as well as how it can be made more popular .

AYO OLOPON is a game which uses carved wood and local some local dry seeds as the tools.

It is popular in the south west and it is one of the agelong traditional games, mostly played for fun, to ease the stress of the day but has now been enlisted as a game in the National Sports Festival.

This unique game requires some arithmetic skills and brain power to skillfully defeat the opponent and ensure victory between two players.

The wooden curves used for the game come in different designs with twelve holes, divided into six for each part, for the two players.

Each of the holes has four seeds with which the players take turns to drop all round the holes with the aim of collecting all seeds from the opponent to determine a winner.

In some villages, the game is played among the aged with lot of fans and atimes with local drinks which they said aid assimilation.

A lover of Ayo Olopon, Mr Segun Ayesemiju Ayo said the game was brought from obscurity to prominence in 1998 and since then, it had won medals, gold and silver for ondo state.

His words “Ayo olopon is a game for the intellectuals and we have inaugurated a team called catch them young to reach out to primary and secondary school pupils and we have been going to teach them. I won gold for Nigeria in 2003 all African games in Abuja and ever since the game had not been played internationally so we are speaking to stakeholders to give it more attention and if they do Nigeria can get medals ahead of other countries”

A Gold medalist in AYO OLOPON at the 2003 All African game in Abuja, Coach Joshua Ogunbiyi said he was glad that the game was gaining popularity but advocated more awareness and encouragement for those interested in it to enable Nigeria to have comparative advantage ahead over other African nations when played in major tournaments.

Coach Ogunbiyi who is also the head coach of Ayo OLOPON game in Ondo state said plans had been finalized to tour schools in the state and teach students some of the rudiments of the game.

Other stakeholders expressed optimisim that traditional games in Nigeria such as Danbe,kokowa,Abula and Ayo olopon among others if modified would produce more medals for the country and help in assisting youths to divert their energies to productive ventures rather than
engaging in social vices.