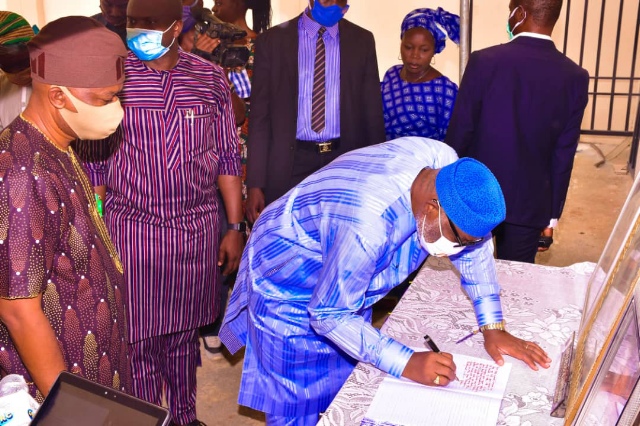 Governor Oluwarotimi Akeredolu says governments of Ondo and Ekiti States will organise a beffiting burial in honour of the late governor of the old Ondo State, Envagelist Bamidele Ishola Olumilua

Governor Akeredolu while speaking at the country home of the former governor in Ikere-Ekiti said Pa Olumilua bestrode the firmarment of old Ondo State like a colosus and that he would never be forgotten.

He explained that he was already in touch with Governor Kayode Fayemi  in preparation for the burial of the late governor who according to him has left his footprints on the sands of time.

Signing the condolence register, Governor Akeredolu noted with deep emotions the salutary efforts of the late Olumilua while at the helm of affairs in the old Ondo State before the bifurcation of the state into the present Ondo and Ekiti States.

Responding, first son of the late governor, Mr Muyiwa Olumilua who is the Commissioner for Information in Ekiti State appreciated Governor Akeredolu for the visit describing it as uncommon and unprecedented in  honour for his late father

Late Evangelist Bamidele Olumilua who died on Thursday at the age of 80 was  governor of the old Ondo state from January 1992 to November 1993.