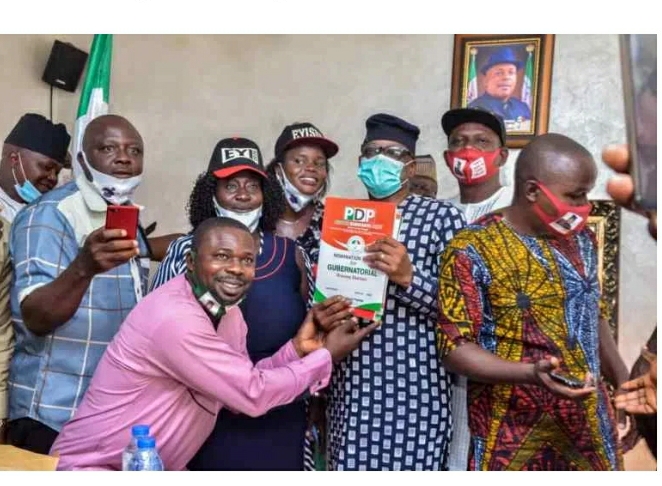 The Ondo state governorship candidate of the peoples democratic party in the 2016 polls, Mr Eyitayo Jegede, a senior advocate of Nigeria has joined the race again.

Mr Jegede who picked his nomination forms at the PDP national secretariat said he returned to the race because his dreams for the state were still very fresh despite the fact that he was manipulated out in 2016.

Mr Jegede who served an eviction notice on the Rotimi Akeredolu led APC government in the state, expressed confidence that he would win be the PDP primaries scheduled for july 22.

He promised to establish a sea port, tackle schools drop out syndrome affecting children, empower the youths, and bring integrity to politics in the state if elected.

On how to raise funds to achieve these Mr Jegede said “if the current Governor could use over 5 billion Naira to build one small bridge, I can get the funds”

Addressing Jegede and his entourage, the National Chairman of the party, Prince Uche Secondus, assured them of credible and transparent primary election come July 22.

Secondus , who was represented by the Deputy National Chairman, South, Hon. Yemi Akinwonmi, said “It is our responsibility to conduct integrity base primaries. It is not our duty here to preach any zoning . We want to assure you that we will not do anything that is not normal.

“The party is known for conducting free, fair and credible primary elections and that of Ondo state will also be free and fair because we have history of doing it right.

” We know you. You have done before and we assuring that every process will be transparent.

Others are, a former Deputy Governor and former Ambassador and a member of Board of Trustee of the party, Otunba Omolade Oluwateru and Hon. Benson Amuwa, former NDDC Commissioner in the state. Hon. Bobby Omotosho, former House of Representatives member from Owo/ Ose federal constituency, Hon. Debo Ologunagba , former House of Representatives member from Akoko and other political heavyweights across the 18 local governments of the state with former Commissioners, Board members, among others.

Jegede a successful senior lawyer with over 35 years experience in practice, was the candidate of the party in the 2016 governorship election in the state.