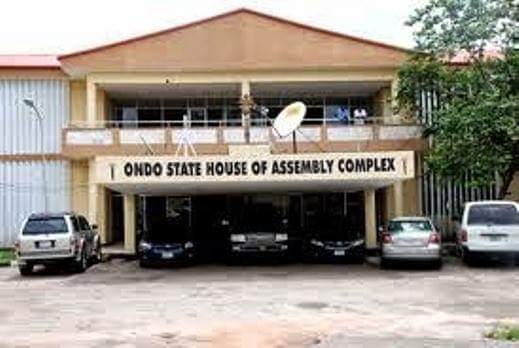 The Ondo State house of Assembly has suspended three of its members over act of indiscipline and disregarding house rules of engagement.

The lawmakers at a plenary presided over by the Speaker, Mr Bamidele Oleyelogun through a letter read by the clerk of the house, Mr Bode Adeyelu announced the suspended members to include the deputy speaker, Mr Iroju Ogundeji, Mr William Adewinle and the only female lawmaker, Mrs Favour Tomomewo.

The house also announced that an adhoc committee would be set up to look at the action of the lawmakers.

The Clerk of the house during the plenary also read a letter from the Majority Leader, Mr Jamiu Maito indicating his resignation from the position which the house accepted and however expressed surprise over the decision.

Meanwhile the decision of the house to suspend the three members raised dust which brought the plenary to illogical conclusion.

The situation became rowdy outside the chamber as the lawmakers started trading words over allegation of members inducement to impeach the embattled deputy governor, Mr Agboola Ajayi.

Security personnel were on ground to forestall any unforeseen circumstances.