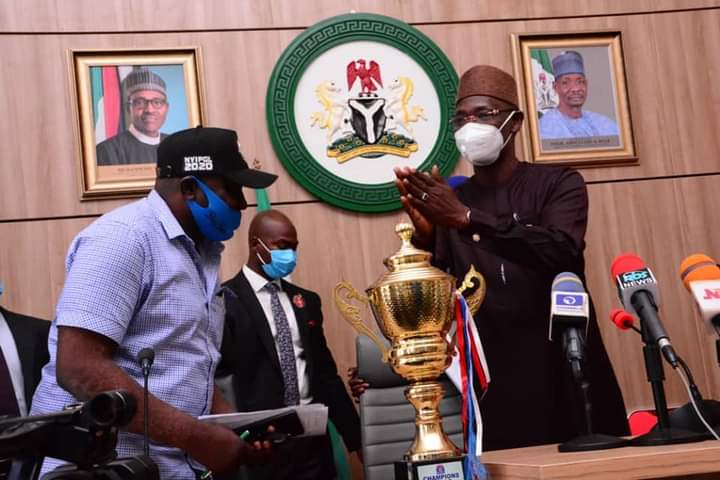 It was a Wednesday that would remain indelible in the hearts of sports men and women from Nasarawa State as the Governor of the State, His Excellency, Engr. Abdullahi Sule, showered athletes and coaches from the State who have won medals and trophies in various sporting championships with cash rewards to the tune of ten million naira.

At a brief recognition ceremony held at the Government House, in Lafia, the State Commissioner for Youth and Sports Development, Hon. Othman Bala Adam, had led the various victorious medallists, technical officials as well as sports administrators to present their various achievements and or laurels won to the Governor since he assumed office on May 29th, 2019.

In his remarks, the Commissioner said the event was a historic one as it was the first time since the State was created in 1996 that an occasion to collectively honour and reward successful athletes and their coaches would be held, highlighting some of the successes recorded in the less than two years of the Governor Sule-led administration.

“Your Excellency, today is a historic day as far as sport is concerned in Nasarawa State. Due to your disposition towards sports development, and your love for the youth,
before you here are athletes who have won twenty-two gold, eleven silver, and twelve bronze medals, making a total of forty-five medals won by Nasarawa State athletes in different sporting championships across the country and beyond, since you assumed office on 29th May, 2019.

“Also, we have some coaches and administrators from the State who are currently with the various national teams and football bodies, among whom are Samson Marwa Keshi of Nasarawa United now with the U-20 Male National Football Team(Flying Eagles), Christopher Danjuma of Nasarawa Amazons now the head coach of Nigeria’s U-20 Women’s Football Team(The Falconets), Mohammed Sani with the State Volleyball Team, now with the country’s U-19 Volleyball team, Chairman of Nasarawa United FC, Barr. Isaac Danladi, who recently got appointed into the NFF Technical and Development Sub-Committee, Chairperson of Nasarawa Amazons, Hajiya Husseina Suleiman Nagogo, now as Secretary of the Nigerian Women’s Football League Club Owners’ Association, the State Karate coach, Kingsley Enyie, now as coach of Nigeria’s U-15 Karate team, and the goalkeeper trainer of Nasarawa Amazons, Yahaya Audu, who is also the goalkeeper trainer of Nigeria’s U-20 Women’s National Football team

“Nasarawa State has now become a hub of women’s football in Nigeria as there are a total of ten players from our own team, Nasarawa Amazons, in the various women’s national football teams – three in the Super Falcons, four in the -U-20(the Falconets), and three in the U-17(the Flamingos).

And under your leadership, we can proudly say we have a national referee in basketball from Nasarawa State.The State has never had it this good, Your Excellency”, Othman Bala stated.

He revealed that the passion of the Governor towards sports and women’s football development had equally provoked the Nigerian Women’s Football League to host the 2020/2021 NWFL season curtain raiser match in Lafia, which would see two Federal Ministers, Sunday Dare(Youth and Sports) and Pauline Tallen(Women’s Affairs), and the United Nations’ representative to Africa on Gender Matters, gracing the occasion.

In his reaction, the Governor, Engr. Abdullahi Sule, congratulated the athletes, coaches and administrators for bringing glory and making the State proud.

“Let me congratulate everyone of you for making the State proud. The coaches and athletes are the pride of Nasarawa State.

“I also thank all those who have relentlessly channelled their resources into the promotion of sports and development of our youth.”

The multiple-award winning Governor used the occasion to eulogise the Youth and Sports Commissioner, Othman Bala Adam, describing him as a jack of all trades in sports.

“The honourable commissioner seems to be a jack of all trades. I don’t know whether he is a basketballer, tennis player, or even a footballer because he knows everything about all these sports, and that is one unique aspect about him.

I think we made the right decision by appointing him as the Commissioner, because that is the way it is supposed to be – to be a chairperson over the athletes and coaches, to encourage them, give them all the hope and support for them to do what they are doing. I thank him for all the wonderful things he has been doing for Nasarawa State.”

Governor Sule also praised the dexterity of Barr. Isaac Danladi of Nasarawa United and Hajiya Husseina Suleiman Nagogo of Nasarawa Amazons for leading both state-owned teams in the right direction.

“Barr. Isaac, the indomitable chairman, Nasarawa United, is a man who has the ability to turnaround things.

“And Hajiya Husseina, the chairperson of Nasarawa Amazons, is a lady who has continued to go places.”

The Governor noted that sport is a lucrative business, hence the urgent need to tap into its huge potentials to create jobs and generate revenue for the state.

“The era of looking for minerals to develop the economy is gradually fading away. This is now the time to use technology to develop the economy, especially through sports. And one of the bold steps we have taken was to construct and commission a world-class swimming pool here in Lafia that can both be used for training of our swimmers and host international championships.”

Responding on the request by the paramount ruler of Doma kingdom, Andoma of Doma, His Royal Highness, Alhaji(Dr)Ahmadu Aliyu Oga Onawo, the Governor said the State Government would convert the Lafia City Hall to an indoor sports hall, stressing that adequate funds would be immediately made available to remodel the facility to accommodate more indoor and open-air sport courts, an edifice, he subsequently renamed “The Sports Arena” to make it capable of hosting international sporting events.

Engr. Sule reiterated his administration’s commitment towards sports and youth development aimed at making the Solid Minerals State the hub of sports development in Nigeria and Africa as a whole within the shortest possible time.