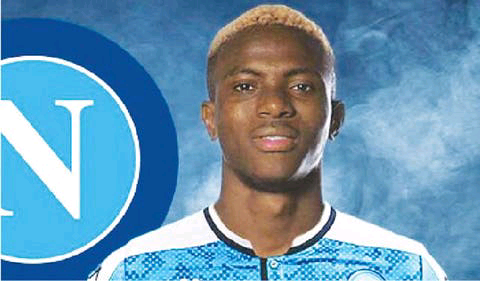 Nigeria striker Victor Osimhen has tested positive for coronavirus on his return to Italy.

Osimhen’s Serie A club Napoli confirmed this on Friday.

The 21-year-old has been sidelined since last November after dislocating his shoulder while representing Nigeria in the Africa Cup of Nations.

“Napoli can confirm that Victor Osimhen has tested positive for COVID-19 following his return to Italy,” Napoli said in a statement.

“Osimhen is currently asymptomatic and has not come into contact with the rest of the squad.”

Napoli paid French club Lille a club record fee of up to 80 million euros ($94.6 million) to bring the forward to southern Italy on a five-year deal last summer.

Osimhen has scored two goals in six league appearances, but has not played since November 8 because of his shoulder injury.

The positive test could rule him out of the Italian Super Cup against Juventus on January 20 in Reggio Emilia.