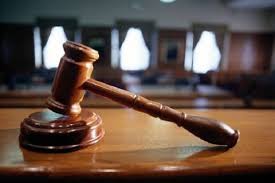 A former Managing Director of the defunct Fin Bank Plc, Mr. Okey Nwosu, who was charged with N10.9bn fraud has been convicted and sentenced to three years imprisonment by a Lagos State High Court in Ikeja.

The trial lasted ten years before justice was delivered.

The defendants had been arraigned in May 2011 before Justice Lateefa Okunnu, but the Court of Appeal had in November 2013 quashed the charges pressed against them by the Economic and Financial Crimes Commission and set them free.

The EFCC, however, appealed to the Supreme Court, which upheld the appeal and ordered Nwosu and others to return to the High Court for their trial in 2016.

The convicts were arraigned before the court by the EFCC on a 26-count charge of stealing and illegal conversion.

Delivering judgment, Justice Lateefa Okunnu noted that the prosecutor had been able to prove the allegations of conspiracy between Nwosu and Dayo Famoroti with various evidence and testimony before the court as key players who orchestrated the fraud.

The judge sentenced the duo to three years imprisonment with a restitution order of eight million naira.

Justice Okunnu however found Danjuma Ocholi and Agnes Ebubedike less culpable of the level of the offense against them.

The court sentenced Ocholi to one-year imprisonment and ordered Ebubedike to carry out a non-custodial sentence.

Mrs. Agnes Ebubedike is to render environmental service to a local government twice a week for six months.

The EFCC Prosecutor, a Senior Advocate, Rotimi Jacob, commended the court for a well-considered judgment.