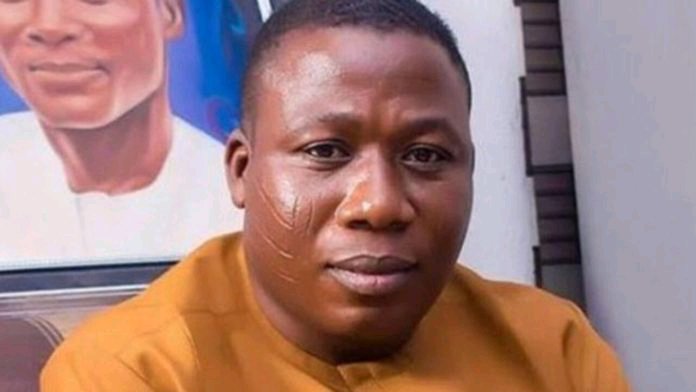 He was received with excitement by youths of the community who welcomed him with singing and dancing before storming Igangan Town Hall where he addressed them.

The visit is coming in fulfilment of a promise by Sunday Igboho to ensure that banditary and kidnapping were totally eradicated in ibarapa and Oyo state as a whole.

The activist had, on January 15, stormed the Fulani settlements in Igangan with an instruction that the entire Fulanis in the community should leave the area within seven days, having been fingered in the series of abductions, killings, and other criminal activities in the area.

Addressing the youths, Sunday Adeyemo who could not hide his anger insisted that herdsmen would be chased away from the town and the entire Yorubaland for inciting insecurity and banditry.

He enjoined the people to remain calm noting that normalcy, safety and security would soon return to the region with the move taken so far.

He added that the visit was a product of the frustration by the incessant killings, kidnappings, and destruction of farms allegedly carried out by herdsmen in Ibarapaland, Igboho areas of Oyo state as well as in the entire Yorubaland.

Ahead of his arrival, some youths made bonfires on major streets of the town, singing and chanting solidarity and freedom song from all forms of oppressions.

Speaking on the development,a community leader,Taiwo Adeagbo explained that, Sunday igboho left the town immediately after the meeting held at the town hall.

Chief Adeagbo also said trouble however started when some fulanis brought out some ammunition including AK – 47 to attack some of the youths right in the presence of officers of Nigerian Police that had come to ensure peace and order in the area.

He said eight persons were injured in the attack but were all responding to treatments.

Reacting to the development asigangan of igangan land,Oba Lasisi Olawoye-Adeoye said he had cautioned the fulanis so many times on their excesses but they had refused to listen to him.

The monarch however denied inviting Sunday igboho to ibarapa to curb the excesses of the fulanis as been alleged.

The Seriki Fulani of Yoruba Land,Alhaji Saliu Abdulkadri insisted that Sunday Igboho and his men killed two fulanis while three others are still missing.

Responding,the police public relations officer Olugbenga Fadeyi said police officers and other security officers have been deployed to the area to prevent break down of law and order.

He however said no report of any killing had been sent to his office.

It was gathered that Seriki Fulani’s settlement and five of his vehicles were set ablaze by the angry mobs.