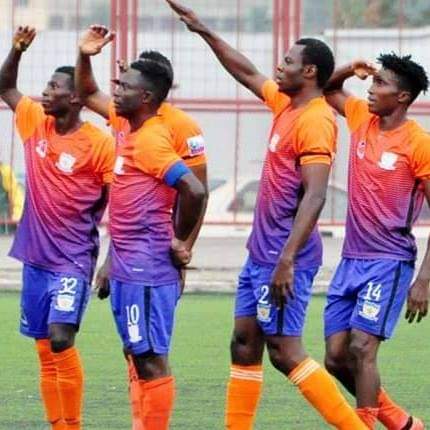 Red-hot Sadeeq Yusuf bagged a brace to cap Sunshine Stars five-star performance with victory in a frenetic matchday six encounter against Dakadda FC at the Nest of Champions, Uyo.

Coach Ggenga Ogunbote rang few Changes to the starting line up, handling a second start of the season to attacking midfielder, Yusuf and resting injured Kehinde Adeyemi for Habib Yakubu.

The game opened up quickly and the hosts tested goalkeeper Ariyo David’s pedigree; the goalie responded with two crucial saves inside the first five minutes, denying the hosts of an early breakthrough.

Despite having a penalty appeal turned down earlier on for handball, the Owena Whales gathered momentum and registered the first attempt on target from a Kabiru Tijani’s freekick.

The resulting corner kick from the save on the free kick was delivered by Seun Olulayo and there was no denying Yusuf, who headed home the opener and his third goal of the season.

Dakkada mounted pressure and pushed for a leveler, but centre back Olatunde Abisoye and goalkeeper Ariyo made important blocks to ensure Sunshine Stars lead into the break.

The second half resumed with the same urgency with momentum swinging in either side.

At the other end, Abisoye and Bright Akpojuvewho soaked all the pressure from Dakadda’s threat with full backs, Olulayo and Ebuka Akobundu providing good cover from the rears.

Minutes after Chinedu Udechukwu was denied by the post, Sunshine Stars doubled the advantage in the 63rd-minute through Yusuf who hit the back of the net from another Seun Olulayo’s assist.

However, the celebration had barely ended when the hosts hit back to halve the defict through Jesam Edet.

Dakkada turned up the heat, in search of a possible equalizer but Ariyo was up to the saves to maintain the lead.

Sunshine Stars didn’t stop creating with winger, Fuad Ekelojuoti going close twice in the closing stages; he forced Olawale Oremade into good save in the 76th minute before firing high from Waheed Adebayo’s squre pass in the 84th minute.

The lads held on in stoppage time and pocketed a devserved win on the road.

Both Ogunbote and Ariyo were present at the post match presser and offered their thoughts on the hard-earned win.

Ogunbote: _”The commitment level was high, I sounded it to the (the players) that if you want to make impact in the league you have to win on the road._

_”We are still a team in the making and we need to invigorate the team with some new players as soon as we can. On Sadeeq? We hope to have more of him but we win as a team.”_

Ariyo: _”We prepared well for this game and as we are going back home the coach knows the best thing to do; he going to push us to win our next game (vs. Rangers)”_