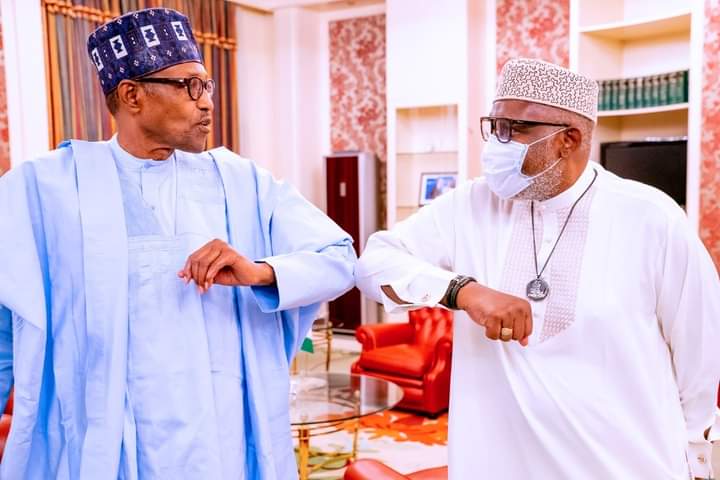 Chairman of the South-West Governors’ Forum and Governor of Ondo State, Arakunrin Oluwarotimi Akeredolu,SAN, on Wednesday met with President Muhammadu Buhari at the Presidential Villa, Abuja.

The governor seized the opportunity of the meeting to brief the President as the regards the precarious security situation in the region, especially Ondo state.

“The Governor met with the President at a meeting; and it centered on the issue of security concerns in the Southwest, especially in Ondo state.

“It was a huge opportunity for the governor to put the records straight as regards the erroneous impression that Governor Akeredolu had asked all Fulani and herdsmen to vacate the state.

“The meeting afforded both leaders a great window to explore ingenious methods to tackle the issue of insecurity in the region.

“In particular, Governor Akeredolu sought and indeed, obtained the president’s support and encouragement to flush out criminals in the forests of Ondo State.

“It was a needful meeting and more of such are very likely in the days ahead as the unanimity of purpose against crime gets the desired attention”.

Governor Akeredolu alongside his brother Governors from the Southwest region and their colleagues from the Nigeria Governors’ Forum (NGF) met with the leadership of the Miyetti Allah in Akure on Monday.

The meeting was at the instance of the Chairman of the NGF and Governor of Ekiti State, Dr. John Kayode Fayemi.

At the Monday meeting, both the Leadership of Miyetti Allah and the Governors threw their support behind the directive of Governor Akeredolu that all herders occupying the forest reserves illegally should vacate it within seven days or properly get registered.

Aside, the meeting also affirmed the ban on night and underaged grazing and also outlawed the presence of cows in cities and highways.