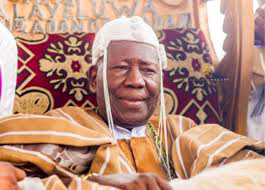 The Olubadan of Ibadanland, Oba Saliu Akanmu Adetunji has called on warring factions in the crisis at Shasha area of Ibadan to sheathe their swords in the interest of peace and stability.

Oba Adetunji who bemoaned the spate of insecurity in the land in recent times made this known in Ibadan after virtual meetings with stakeholders, including Yoruba, Hausa and Fulani leaders in Ibadan, the State Capital.

The Monarch declared that for all Citizens to be called Nigerians, it was imperative that people eschew violence, bitterness and rancour by ensuring that minor conflicts did not always degenerate into wanton destruction of lives and properties.

He stated that it came to him as a shock that crisis could break out in Shasha and degenerated into such a large scale destruction of properties of neighbours who had cohabited for ages.

While commending the efforts of the Oyo State Governor, Engr. Seyi Makinde at restoring peace in the area so far, the Olubadan also called on him to explore the possibility of compensating all those who have been affected by the needless crisis.