Another Set Of Cows Die Mysteriously In Ondo, Monarch Vows To Unravel Cause 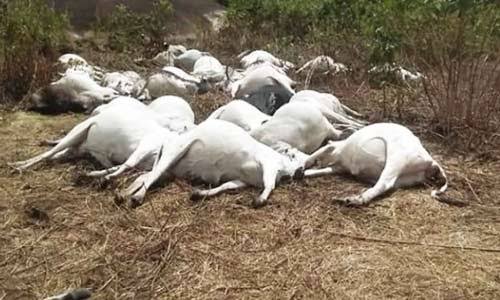 According to the owner of the cows, Ibrahim Saliu, Popularly known as Baba Saliu, the incident occured in the night on Monday when all residents had gone to sleep.

Saliu said he raised an alarm on seeing the situation thereby causing panic in the community.

A source in the community however told Positive fm that the cows could have been poisoned by some unknown persons who were envious of the magnanimity of Ibrahim saliu,  the owner of the cows.

Reacting to the development, The monarch of Akungba Akoko, Oba sunday Ajimoh promised to unravel the cause of the cows’ death.

Oba Ajimoh however warned against anybody selling or buying such cows.

Also speaking, a retired environmental officer Alhaji Sule Arekemase cautioned cowmeat consumers and butchers not to buy suchmeat because of the health implications.

This is the third time this is happening in Ondo state as scores of cows also died mysteriously in both Ikare and Ijare towns two years ago.