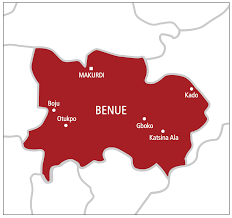 Following the attack and killings, angry youths of the area numbering thousands on Tuesday morning blocked the Makurdi-Lafia Highways with the dead bodies, stones and log of woods.

A resident of the Abagana community who narrated the incidence to newsmen said the gunmen forcefully gained access into the camp shot some and macheted the others.

Benue State Governor Samuel Ortom who visited the scene of the attack described it as barbaric, cowardly and unacceptable, calling on President Muhammadu Buhari to rise up to his responsibility of protecting lives and property.

Governor Ortom lamented that in the past few months, more than seventy people have been killed by Herdsmen across the state, alleging that the leaders of Miyetti Allah were behind the attacks.

Ortom appealed to the President to convene a security summit where he would personally address the nation on the state of insecurity and what needed to be done to surmount the challenges and to declare a state of emergency on security.