No Massive Recruitment In FEDPOLEL- Management 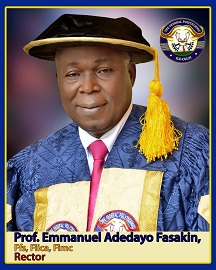 The attention of Federal Polytechnic, Ile-Oluji,Ondo State has been drawn to a series of purported job vacancies being peddled on the social media and credited to _Pinnacle Report_ with the caption ” _Massive Recruitment _at_Federal__ _Polytechnic,Ile-Oluji”.

There is no iota of truth in this misleading report as the said vacancies did not emanate from the Polytechnic.

For the avoidance of doubt, and the awareness of the general public, the Polytechnic only advertised for the vacant position of Registrar in the Institution on Monday, 7th June, 2021 in the Leadership and Punch Newspapers and on the Polytechnic’s media platforms.

Any vacancy aside the aforementioned is fake news, and the general public is hereby advised to disregard it in its entirety.

This disclaimer becomes necessary in order to properly guide the general public and Friends of the Federal Polytechnic, Ile-Oluji as appropriate.