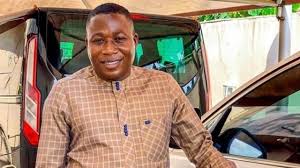 The new residence of popular Yoruba rights Activist, Chief Sunday Adeyemo came under attack early Thursday morning by some yet to be identified gunmen.

Positive fm gathered that sounds of sporadic gunshots were heard around the house of Chief Adeyemo who is popularly known as Sunday Igboho.

It could not be confirmed if Chief  Adeyemo was in the residence while the shooting lasted.

Report says some valuable properties including vehicles,furniture and windows were destroyed by the unknown gunmen.

Bullet holes were also found on cars parked in the premises while blood stains were reportedly seen within the compound.

Police In Oyo state are yet to comment on the incident.

The Ibadan residence of Sunday Igboho came under similar attack in January this year during which a part of the house got burnt.